Advances in the Computational Sciences

With the rapid advances in the computational sciences, a relatively new field that uses advanced computing abilities and data analysis to solve complicated problems, many previously unimaginable computational applications are becoming possible.

Researchers for and officials in the military need to computationally test new weaponry; analyze images from satellites, surveillance cameras, and radars; store and sort internal information; etc. As military data constantly grows, the computational calculations and challenges – such as CPU time, memory, and disk space – grow with it. Therefore, distributed computing, a technique that divides a larger computational problem into smaller sub-problems that processors can solve more efficiently, is now used for military applications.[1]

At the Large Hadron Collider (LHC) in Geneva, Switzerland, particles collide approximately 600 million times every second. Each of these collisions are recorded and sent to the CERN Data Center (DC) to be analyzed. Due to the large amount of data that is collected every day, DC does not have enough computational power to deal with the large amount of data gathered by the LHC, so it implements grid computing. The Worldwide LHC Computing Grid (WLCG) is a distributed computing infrastructure lets DC share the information from the LHC with other computer centers around the world. This allows over 8000 physicists access to the data whenever they want.[2] 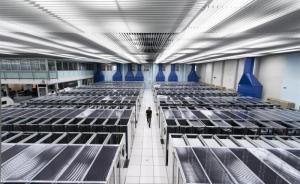 Computational chemistry uses computer simulations based on mathematical equations to describe molecules and predict chemical reactions. The information gathered assists researchers in wet labs in predicting the results of their experiments and better prepares them for making observations. The basis for many of the most accurate calculations is the Schrodinger Equation, a partial differential equation that can be solved only approximately. Even then, calculations involving the equation require a lot of computational power. Hence, many other methods, such as Density Functional Theory, are currently being developed, adjusted, and tested against the Schrodinger Equation to find a cheaper yet still accurate approach to be used in computational chemistry research.[4]