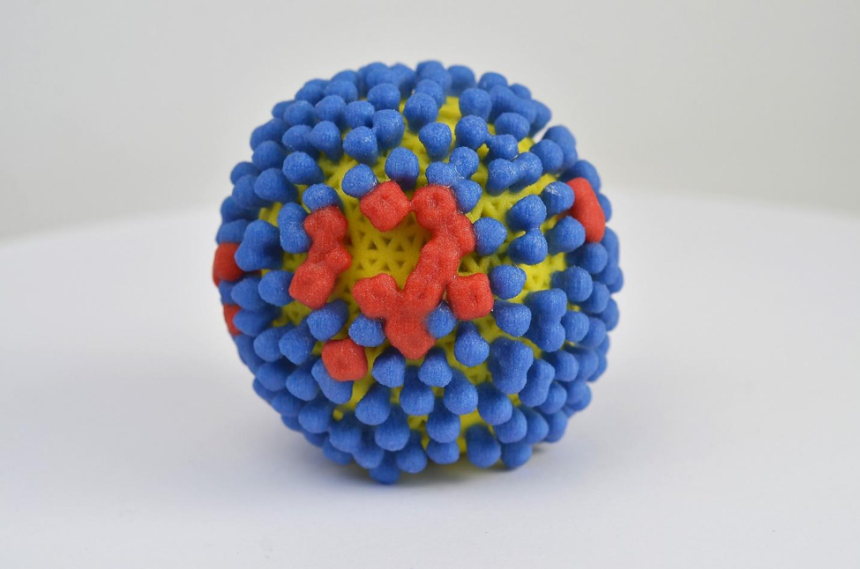 A disease labeled as “epidemic” spread across Washington state this winter. Patients overwhelmed hospital resources across several counties and a Disaster Medical Control Center was activated after a decade of inactivity. The culprit? Influenza (flu) virus.

While many may be familiar with the standard symptoms – such as coughing, fever, and a sore throat – associated with the flu,[1] the virus also has a darker side. Influenza can cause complications such as pneumonia, sinus infections, and even death. Vulnerable populations such as young children, pregnant women, people with other pre-existing medical conditions, and adults 65 years and older are especially at risk.[2] In the 2015-16 U.S. season, there were an “estimated 25 million influenza illnesses, 11 million influenza-associated medical visits, 310,000 influenza-related hospitalizations, and 12,000 P&I [pneumonia and influenza] deaths.”[3]

Small genetic errors often occur when the influenza virus replicates. When they accumulate, a new, closely-related influenza virus strain can be made (this evolutionary mechanism is called antigenic drift). These genetic changes affect our ability to combat the ever-evolving virus strains, which is why the flu shot is updated every year.[1] To keep up with the location and severity of flu activity, the Centers for Disease Control and Prevention (CDC) and Department of Health monitor data weekly.[4,5] While the specific timing and intensity of the flu season changes every year in the U.S., influenza activity most commonly peaks between December and February.[5] From October to May, the CDC is busy reporting flu activity with a surveillance system that includes hundreds of medical professionals, medical centers, and laboratories across the county.[6]

At the start of 2017, news coverage about the flu in Washington was booming. Several regional television newscasts and newspapers used the term “epidemic” to describe the outbreak,[ 7–10] but what does that mean? According to the CDC definition, a flu epidemic occurs when flu activity in an area is higher than the baseline level. Baseline levels are simply determined from activity during months when the flu is not highly prevalent.[11] Noting that definition, it isn’t surprising that influenza epidemics are an annual occurrence.

“For flu, there is a seasonal epidemic almost every year in the United States usually between October and mid-May. [The] CDC and the medical community refer to this as the flu season,” notes the CDC website.[11] This flu season, the Washington State Department of Health is using a new system to model whether influenza is at epidemic levels. They described the flu activity level as “above the seasonal baseline but below the epidemic threshold.”[12] Ultimately, it seems that calling this year’s flu season an epidemic depends on which definition you use. A flu pandemic, an outbreak that affects the entire world, is much rarer.[1]

This year in Western Washington there was a higher proportion of visits to emergency departments for influenza-like illnesses (fever with cough or fever with sore throat) than in the past three flu seasons. The most recent Washington State Department of Health update stated that 268* reported deaths due to influenza have occurred so far since late 2016 compared to only 58 at this time during the 2015-16 season. Most of the 268 individuals who died either had underlying health conditions or were elderly.[12] It is also important to note, though, that influenza-related deaths are usually underreported. Flu-related complications often interact with other health conditions and it is not common to list influenza as a cause of death.[13]

One of the notable responses to the influenza outbreak this year in Washington state was the activation of a Disaster Medical Control Center (DMCC) by Providence St. Peter Hospital in Olympia, WA. Usually reserved for mass casualty incidents, the DMCC hadn’t been activated in a decade.[8] Chris Thomas, Providence Southwest Region Communication Manager, explained that the DMCC was needed because the other hospital in the city had been on divert status – turning away ambulances – for over 24 hours in part due to the influx of flu patients in the emergency department. Some of the other hospitals in the area were also close to going on divert. By activating the DMCC, nine hospitals across five counties in Southwest Washington were monitored for capacity and ambulances were directed to appropriate locations. The DMCC was reported to be active for 12 hours.[10]

Other hospitals also responded to the influenza outbreak. On the opposite side of the state, Providence St. Mary Medical Center in Walla Walla, WA, placed limitations on hospital patient visitors to reduce the number of people in the hospital and ensure that those who had flu-like symptoms wore a mask.[14]

Regardless of whether the influenza virus in Washington state is categorized as an epidemic or not, there have certainly been an elevated number of cases overall this season. Measures of flu activity have been decreasing over the last several weeks and influenza is now considered to be regional in Washington.[12]

Once the full season’s data (including genetic testing results) comes in, public health officials might be able to shed light on why this season appeared to be worse than the last few years. According to the CDC, the flu vaccine was 48% effective this year.[15] Perhaps chance genetic mutations caused a virus strain to change from what researchers predicted.  It remains to be seen what lessons have been learned from this year’s flu season and what measures local medical facilities and the Washington State Department of Health will enact for the future 2016-17 flu season.

*Please note that all of the most recent Washington state health statistics are from Week 14 of the “Washington State Influenza Update.” This document is continually updated by the Washington State Department of Health. The information in this article is current as of April 15, 2017.