The Next Pandemic: It Only Takes One (Part 1 of 3)

“Ebola Virus” by Global Panorama is licensed under CC BY-SA 2.0

Editor’s Note: This article is the first of a three-part series on the components involved in the creation and prevention of infectious disease outbreaks. The next article will be coming in a month–stay tuned!

IT ONLY TAKES ONE infected person to start the spread of a deadly disease. Every outbreak seems to have a “Patient Zero”: the first infected human who spreads the pathogen to others. The HIV/AIDS pandemic is said to have started with one man. The 2013-2015 Ebola epidemic is assumed to have started with one child. Placing the blame on one person, however, is too simplistic a view for something so complex as the causes of a disease outbreak. In reality, it is a web of interconnected factors, continually shifting and growing, that creates the perfect conditions for an epidemic or pandemic.

The difference between an epidemic and a pandemic is really just the spread of the disease outbreak. An epidemic, which usually covers a relatively small geographic region, becomes a pandemic once it spreads to a wider area such as a continent or the entire world.

“You really [need] lots of conditions lining up in the same place and time to have epidemics,” explains Erin Mordecai, an assistant professor studying disease ecology at Stanford University.[1] “There’s a suite of changes all happening together. Changes in climate, rainfall, land use, population density, and infrastructure, all of which create a huge amount of risk for disease transmission.” Epidemics and pandemics develop from a variety of factors such as as globalization, disease susceptibility, vector spread, and biodiversity, to name just a few. The complexity of disease outbreak, however, doesn’t prevent an outbreak from occurring. Our world has experienced a large disease outbreak every other year or so when the necessary elements line up. To understand just how this happens, let’s begin with the smallest component: the individual.

THE INDIVIDUAL is the basis from which the larger elements of a pandemic build. First, there’s the individual pathogen: the virus, bacteria, or other microorganism causing the disease. Pathogens can manifest in a variety of ways, but the culprits of recent epidemics and pandemics, such as Ebola and HIV/AIDS, have been zoonotic.[2] Zoonotic diseases originate in animals, such as bats, monkeys, and birds, and then spread to humans.

For this jump to happen, contact is key. One method is direct transmission of the disease, or ‘spillover’ to humans, which occurs by animal bite, exposure to the blood of the animal, or consumption of contaminated food.[3] While direct exposure seems easy to avoid, changes in land use through agricultural expansion and urbanization, in addition to the legal and illegal wildlife trade, increase the frequency of direct contact between humans and animals.[4] These practices also increase human exposure to unfamiliar pathogens by leading us straight into the rainforest, a region that houses many unknown infectious diseases.

The wildlife trade, in particular, expands the range of exposure by carrying the zoonotic animal hosts to parts of the world that are usually not at risk. The danger of this was exemplified when Marburg virus, a sister of Ebola, infiltrated a town in Germany in 1967. Ugandan monkeys carrying the virus were illegally traded near the town, spreading the virus amongst themselves, their handlers, and the general population, infecting thirty-one people and killing seven.[5]

Direct exposure is just one way for a pathogen to invade the human population. Indirect contact–where a pathogen is picked up by another organism before reaching the human–is another common mechanism for disease transmission. This other organism, the “middle man,” is called a vector. Mosquitoes, such as Aedes aegypti, are the most common infectious disease vectors, carrying diseases like Zika and Chikungunya around the world.[1]

“You [need] the climate and the habitat to be suitable for the mosquito,” explains Mordecai. “The mosquito has to be really abundant, it has to come into contact with lots of people, [and] it has to be able to get infected with the pathogen and be able to transmit it to people.”[1] Contact with humans is just as crucial for the vector in indirect transmission as it is for the pathogen in direct transmission. High population density and poor infrastructure are two factors that amplify this crucial interaction. Trash, standing water, and general filth in a city or region, are all consequences of poor infrastructure and create a near-perfect habitat for mosquitos and disease transmission.

Climate change also helps establish and expand these perfect thriving grounds for the vectors. Ian Lipkin, a professor of pathology at Columbia University, speculates that rising global temperatures may be increasing the geographic range, particularly around the equator, of infectious disease vectors.[6] As the range of the vectors expands, so does the spread of disease, which puts more human populations at risk. For an in-depth look into the effect of climate change and natural disasters on the spread of vector-borne disease, check out Lilla Petruska’s article here.

“Global map of the predicted distribution of Aedes aegypti in 2015” by Moritz Kraemer et al. is licensed under CC0-1.0 Universal

While the individual pathogens and vectors are busy exposing themselves to us, what roles are humans playing in the development of a pandemic? The individual human–“Patient Zero”–is the final individual we will consider in the intricate web of disease outbreak. Our modern lifestyles and industrial activities (environmental encroachment, wildlife trade, international travel, etc.) create efficient transmission pathways across the globe and make us susceptible to, and partially accountable for, the next pandemic.[7]

Just like the pathogen or the vector, Patient Zero must come in contact with other humans to spread the infectious disease. They must cough, sneeze, shake hands, have sex, bleed, and engage in international travel. If humans can fly to the other side of the planet in less than twenty four hours, then so can a pathogen. Weiss, a molecular biologist, notes, “If Ebola broke out in a city with a busy international airport, it could travel across continents in a similar manner.”[8] For this reason, airports were shut down or heavily screened during the Ebola epidemic. As humans move themselves into new regions, geographic ranges of pathogens expand and new sources of susceptible hosts for infectious diseases are created.[9]

These individual components of disease outbreak–the pathogen, the vector, and the human–are constantly playing into each other to the point where we might expect a serious epidemic every month or so. But this doesn’t happen. There are larger factors at play in the development of a pandemic, and the individuals are only the base elements. So, what comes next in our unraveling of the web of epidemics and pandemics? Where does the Center for Disease Control come in? What does the World Health Organization do during an outbreak? These questions will be answered in the remaining two parts of this mini-series: The Next Pandemic. Don’t miss out! 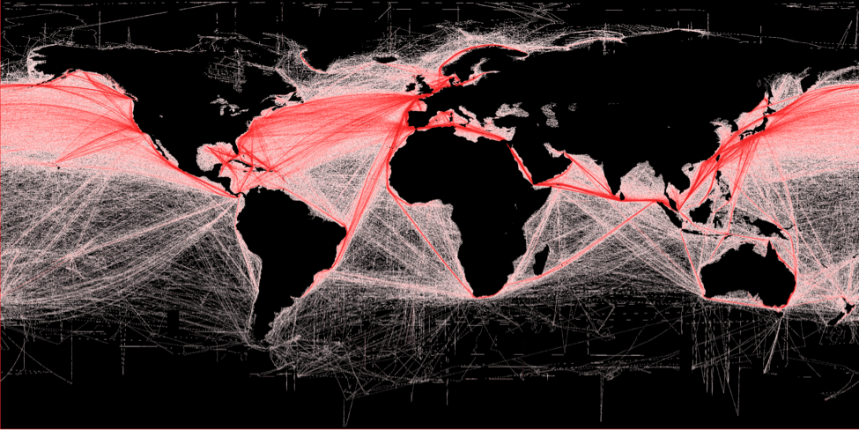 “Shipping Routes red and black” by Tomislav Hengl is licensed under CC-BY-SA 3.0