Members of the Stanford Robotics Club pose with the Mars rover they will be entering into the 2018 University Rover Challenge.

“The time has come to go to Mars,” proclaims The Mars Society’s website, referring to the exploration and settlement of Mars as “the greatest cause of our generation.”[1] While humans on Mars may sound like a shocking prospect from science fiction, exploration of Mars has been a goal of 49 space missions over the last 58 years, many of which have succeeded. Throughout this process, rovers such as Curiosity have been crucial to collecting data and advancing knowledge about the Red Planet. Through The Mars Society’s Rover Challenge Series, teams at universities around the world now build their own rovers and test them at the Mars Desert Research Station in Utah, chosen for its Mars-like terrain.[1] Stanford Robotics Club has taken up the challenge, building Clover the Rover to enter into the University Rover Challenge taking place at the end of the month.

While a wide range of skills were needed to build Clover the Rover, the process initially focused on the mechanical attributes, such as wheels and an arm. 3D printed wheels attached to metal rockers allow the rover the traction and maneuverability it needs to travel over uneven terrain. The rockers allow each side to drive over bumps and climb without tipping over. These rockers are attached through a bar to the chassis, which is the main body of the robot. The chassis has a double layered frame that contains many electrical systems of the rover. Finally, an arm is attached to the chassis. The arm has an attached gripper and an auger for sampling soil.

The mechanical features of a Mars rover enable important scientific tasks such as sampling soil.

Sampling soil is a crucial scientific task to determine the possibility of life on Mars, which is a significant goal for research of the planet. To fulfill that goal, Clover includes a variety of scientific instruments for analyzing the soil and its original surroundings. Sensors for pH, temperature, and humidity identify soil within the ranges that can support life. Conductivity and moisture sensors are used to detect whether water is present, another important trait in life-supporting soil. Finally, a camera is used to visualize the sampling sites, allowing the team to understand more about the sample given information about its location and surroundings.

To function, all components of the rover need to be properly connected and powered. A power distribution board transfers power from Clover’s battery to all antennas and sensors on board. It also tracks which components are using power and includes emergency and preventative measures to protect all electronic components. The environmental sensor board allows the science team to fulfill its responsibilities by holding all needed modules and communicating collected data to the computer.

Besides the mechanics, computer software is also necessary in producing a functional Mars rover. Clover includes a Jetson TX2, a small computer that enables mobile platforms like rovers to use deep learning. Deep learning is a type of artificial intelligence function that can be used to process data, create patterns, and perform tasks that would usually require human intelligence.[2] It can be useful for Clover and similar projects because it enables them to “perform object detection (‘hey, that’s a tennis ball!’), scene parsing (understanding paths from rock walls), and more in near real time,” according to Chandler Watson, co-lead of the Stanford team.[3] An operating system called the Robot Operating System, or ROS, runs on the Jetson to allow such higher-level tasks.

ROS is a common operating system for robotics projects that works similarly to many social media sites. Nodes, which consist of various components of the rover, submit data to various topics. In the social media analogy, nodes would be similar to accounts or users of the site, while topics are similar to hashtags. Users can submit content to hashtags, and they can also follow or search for hashtags that interest them. In ROS, the camera node publishes images to the /camera_image topic, and the driver interface, a program which allows the team to interact with the rover, subscribes to the topic. When new images are published, the driver interface displays them. The driver could then send commands to another topic, and the rover, subscribed to that topic, would adjust accordingly.

ROS and the Jetson TX2 have capabilities that allow Clover to drive autonomously. A variety of information sources are needed for this ability. One is the camera, which enables obstacle avoidance and the ability to view the ground. GPS data and an accelerometer can measure Clover’s location and speed, and together with the camera, this data can be used to create a map of Clover’s surroundings. Information about location, motion, and obstacles can be collected into a single map that Clover can use to drive autonomously.

While several tasks in designing and building Clover had clear areas of focus, many challenges this year have integrated a variety of components. For instance, before the goal progressed to autonomous driving, the team focused on being able to drive the rover at all. The wheels have hub motors to allow all-wheel drive. Hub motors differ from typical motors because typical motors are attached by the case with an axle that spins, while hub motors are attached by the axle with a spinning case. A standard use for hub motors is electric bicycles, common on Stanford’s campus. However, the protocol, or method of communication with the computer, used by these motors was unfamiliar to the team. Watson, tasked with getting the motors to work, spent long days and nights in lab, learning by trial and error to get the motors to respond. After two months, finally getting them to turn forward was, he reflects, “One of my greatest achievements.”[3]

Once functional motors were integrated into the robot, a more mechanical issue emerged. Between the high traction of the wheels and the length of the rockers, both chosen for stability on uneven terrain, turning Clover was a challenge. A small amount of slippage was necessary in either the motors or wheels to turn the four-wheel drive rover, and neither the motors nor wheels allowed for it. Meanwhile, the elongated wheelbase made turning more difficult still. Through modifications to both the rockers and wheels, Clover is now able to turn. The process of producing a drivable robot required input from a variety of team members with a wide range of skills, coordination between the mechanical build and software engineering, and perseverance to overcome challenges encountered in this kind of task. 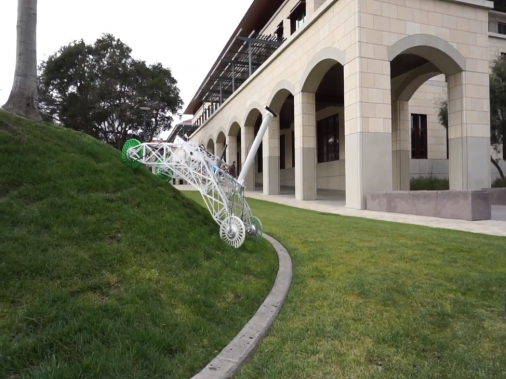 Producing an autonomously driving rover was one of the group’s greatest challenges.

Stanford Robotics Club will be competing in the University Rover Challenge from May 31 to June 2, 2018. Currently, the team is working on testing, troubleshooting, and ensuring that Clover has the best possible chance for success in the competition. Even qualifying to compete is an honor–only 11 teams in the entire United States qualified for the 2018 contest. For the Mars rover team at Stanford to qualify in its first year together as a team is an incredible achievement. Team members are confident and excited as the group faces the challenges ahead. Chandler notes that “seeing Clover in official videos for the University Rover Challenge was truly surreal,” and he has “firm faith in our team” to further its already impressive achievements.[3] Clover the Rover is headed to Utah!

All photos and videos courtesy of Stanford Robotics Club.